With President Greg’s ringing of the Rotary bell, all stood to proclaim “God Bless America” to the accompaniment of Tom Strode’s and Deanna Relyea’s wonderful piano. Steve Pierce came to the podium to give a stirring Inspiration, complete with many quotes by leaders having to do with the environment, politics, and on developing (and maintaining) a giving attitude. 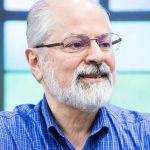 Time Goes By, which, after the first few bars and just a tad’s hesitation, the assembly sang with confidence and emotion. After Greg’s welcome another song was sung — “Happy Birthday To You” — in celebration of Al Storey’s 98th birthday. A standing ovation, with cheers going up to the rafters, greeted our beloved Al. From the hoots and hurrahs and myriad smiling faces, it was easy to see that everyone present had benefited from the pleasure of Al’s company — and from his gentle correction of diction, vocabulary or delivery. ‘The Professor’ beamed with surprised gratitude, reveling in the love of his fellow Rotarians. From the back of the room Arthur Di Blassio shouted an apt “and m-a-n-y more!” as slices of a delicious chocolate and cream cake was served. Happy Birthday Al!

Next, Greg asked a fabulously bonneted Susan Smith to remind us of the upcoming 2019 Rotary Picnic, taking place Sunday, June 23, at the Fast Shelter in Gallop Park, close to the Universal Access Park, from 4:00-7:00 p.m. “We need 50 people to make this fly,” Susan declared in reference to the investment in time, money, and organization the event requires. Susan also explained that the City has granted a wine and beer license only, and not a liquor license, as some thought.

Peg Talburtt came up to present the results of the recent 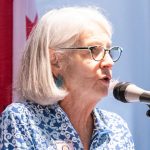 online club survey. “With 123 out of 300+ returned, we had a 40% response rate” — historically, a fairly good rate. Peg then showed several charts illustrating percentage support for various survey questions. Of note was the 2-5 hours (average) of time given by members each week to Rotary business or activities. Some donated less, some more than 5 hours, but the great majority formed a hump in the middle. This result was largely reflected in the next question, which focused on members’ perceived value of Rotary in relation to its cost in dues, donations, and other assessments. As Peg observed regarding costs, “We’re a big club, with a lot of [local, domestic, and overseas] projects.”

Steve Schram followed Peg to the podium with his anticipated “Noon hour edition of the Ann Arbor Rotary Club ‘News You Should Know’…In treanding headlines at this hour: A jury has found former Michigan State University dean William Strampel guilty of misconduct in office and willful neglect of duty. That makes him the first former MSU official convicted following the Michigan Attorney General’s investigation into MSU and its handling of convicted sex offender Larry Nasser….” Next, Steve announced that Google “will expand its Detroit and Ann Arbor offices and add new sales and technical support jobs.” Steve noted that these expansions will conclude in 2020 (Detroit) and in early 2021 for Ann Arbor.

“Gov. Gretchen Whitmer signed a bill Tuesday designed to prevent certain portions of the state’s new auto insurance law from going into effect earlier than intended.” According to Steve, provisions for new bodily injury coverage limits and PIP options won’t begin until after July 1, 2020. Next, a welcome announcement: “General Motors President Mark Reuss is announcing a $150 million investment into the Flint Assembly Plant.”

Now, get this: a “unanimously approved ordinance” could dramatically increase the number of food trucks in the city, most notably in mixed-use and non-residential areas. AND residential properties, which have been off-limits to food truck vendors, will now be opened, provided that “trucks remain only 10 feet away from residential properties.” This is great news, of course, for those of us desirous of converting our neighborhoods into perpetual fairgrounds, where we can enjoy the aroma of fried chicken, brats, and skewered beef wafting through our houses all year long, laminating our furniture, clothes, and appliances in the joyous grease of instant gratification. Next up — legions of picnic tables in front yards, close to the curb. “Dad, may I have another helping?” polite children will ask. “Sure. There’s the truck. Watch the traffic.” And you just know the vendors will sell T-shirts, pennants, and other bric-a-brac; they’ll catch the breezes from racks installed on the truck’s flanks, transforming our communities into exotic visions of desert caravansaries and the Age of Sail. With their belching smoke the literary-minded will recall Melville’s Pequod, tragic exemplar of the whale fishery. Thanks, City Hall!

Speaker: Susan Froelich warmly introduced our speaker, Mike Garfield, Director of the Ecology Center, with offices in Ann Arbor and Detroit. Mike made it personal from the start: “I do

what I do because of my son. He’s graduating from the eighth grade today.” Following applause, he continued. “The Ecology Center was founded in 1970, the year of the first Teach-In in Ann Arbor. This was later used as a model for Earth Day — Wow! A major social [observance] had its beginning right here.” On climate change — “It’s not far away. We have maybe a 12-year window to do something. Precipitation is four times what it was in Michigan 40 years ago.” There is hope, though, in Mike’s message. “Solutions are known and available — renewable, solar, and wind energy; and they’re available in scale in many areas. We’re going to have to make a lot of changes, big and small, in a short period of time,” he asserted. “The good news is, most energy policy decisions are not made in Washington, DC, but in cities and states.” He cited successes in Ann Arbor, Minneapolis, and San Francisco, to name a few. “Ann Arbor, because of its innovators and leaders, adopted LED lighting 10 years ago. And transit changes, like the natural gas-burning buses, and other clean energy initiatives, are making a difference.

“One part of modern life that is not sustainable — STUFF! We need to shift from a linear economy to a circular economy.” He introduced a new concept: “Cradle-to-grave design. Buy it once and it lasts, and can be added to.” In terms of recycling (“We can do more here than in just about anything else”), he illuminated a growing problem — “Recycling has become very expensive for various reasons. China’s higher environmental requirements, and the closure of recycling facilities [as a result].” Bottom line: “We’re treating our recycling like garbage.” Rising costs of cleaning bottles and other containers; newer packaging containing hard-to-sort components; and a lack of investment in maintaining, expanding, and making more efficient our nation’s recycling centers is slowing down the whole process. Another problem, Mike observed, was an erosion of popular interest in recycling. “In the 1970s through the 90s people were enthusiastic about recycling. It’s tapered off since.”

His audience was engaged, however, and at the conclusion many remembered that Mike Garfield’s son was graduating that day. The biggest impact always comes from the personal.

With you we can accomplish even more. Join Rotary today!

Thank you to our sponsors